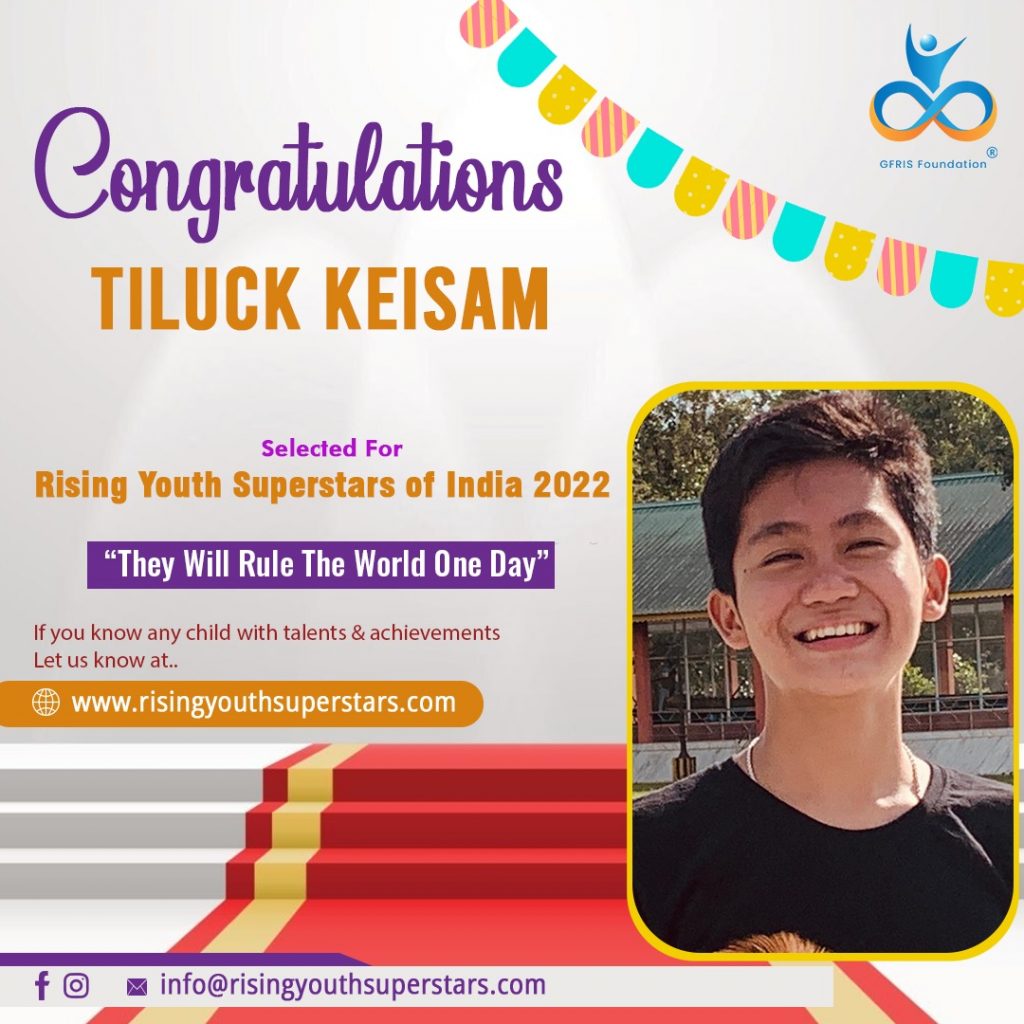 Tiluck Keisam developed an interest in skating when he visited the Siri Fort Complex, New Delhi, with his parents. He saw children of his age skating in the complex and requested his parents to let him join the sport. He started skating at the age of four and started his professional training at the age of five. Limbo skating, a form of skating in which the skater rolls under an obstacle, fascinated Tiluck. His coach first noticed his proficiency at being able to spread his legs while skating. In 2015, Tiluck, under the guidance of his coach, started limbo skating.

His family always stood by him and supported him in all his endeavours. His mother has been his pillar of support and has always stood by him. Tiluck is a dedicated athlete and spends nearly four hours every day polishing his skills.

He is driven by his dream of winning a gold medal at the Olympic Games. He wishes to represent India at the international level and win laurels and awards for the country.

The Guinness Book of World Records has listed Tiluck for the Farthest Distance Limbo Skating under Bars. Furthermore, Tiluck also holds the record for the most cartwheels on roller skates in one minute. Tiluck also has mentions in the Limca Book of Records for a U-turn in Limbo Skating and the Longest Slalom Wave Boarding. He has received the Global Child Prodigy Award and the Global Kids Achievers Award. He is also the recipient of the BYJU’s Young Genius Award and received the Super Talented International Kids Award in Dubai.

Tiluck has an extensive list of achievements, which include nearly a hundred medals. He has participated in various skating championships and proved his mettle in nearly all of them. Tiluck is also a prominent television personality. He participated in the reality show ‘I Can Do That’, which aired on Zee TV. In the show, he displayed his skills in front of a Bollywood celebrity. He has also been featured on several news channels and radio talk shows. The History TV18 show ‘OMG – Yeh Mera India’ covered Tiluck’s story and applauded him for being such a talented individual. Tiluck also represented India in a German TV show titled ‘Superkids’. He was also invited to the Network 18 show called “BYJU’s Young Genius” in 2021.

Apart from skating, Tiluck has also received several awards and laurels in the field of athletics. He won the first position during the Aahwan Inter School Sports Carnival held at JBM Global School, NOIDA. He also won a bronze medal in 50-metre sprint at the W.G.C.D.R.T. Matthew Inter-school Athletic Meet held in December 2016. Tiluck also does yoga and received the third prize at the Rhythm Yoga ATF-MIND QUEST, 2020, organized by Fr. Angel School in November 2020.

Tiluck is a skilled artist as well. He has won several awards in various art competitions. He won the first prize in the drawing and painting competition held at the India International Trade Fair organised by the Income Tax Department at Pragati Maidan in 2012. He has won more than ten prizes in the field of arts and has shown exemplary drawing and painting skills. Tiluck is also academically gifted. He has won several gold medals in various Olympiads and competitions. He is a class topper, too, and has qualified for various competitions on the basis of his outstanding academic performance.

Tiluck is inspired by his dream of winning a gold medal for India at the Olympic Games in the Ice Skating event. Given his hard work, talent and dedication, he is sure to fulfill his dream one day.