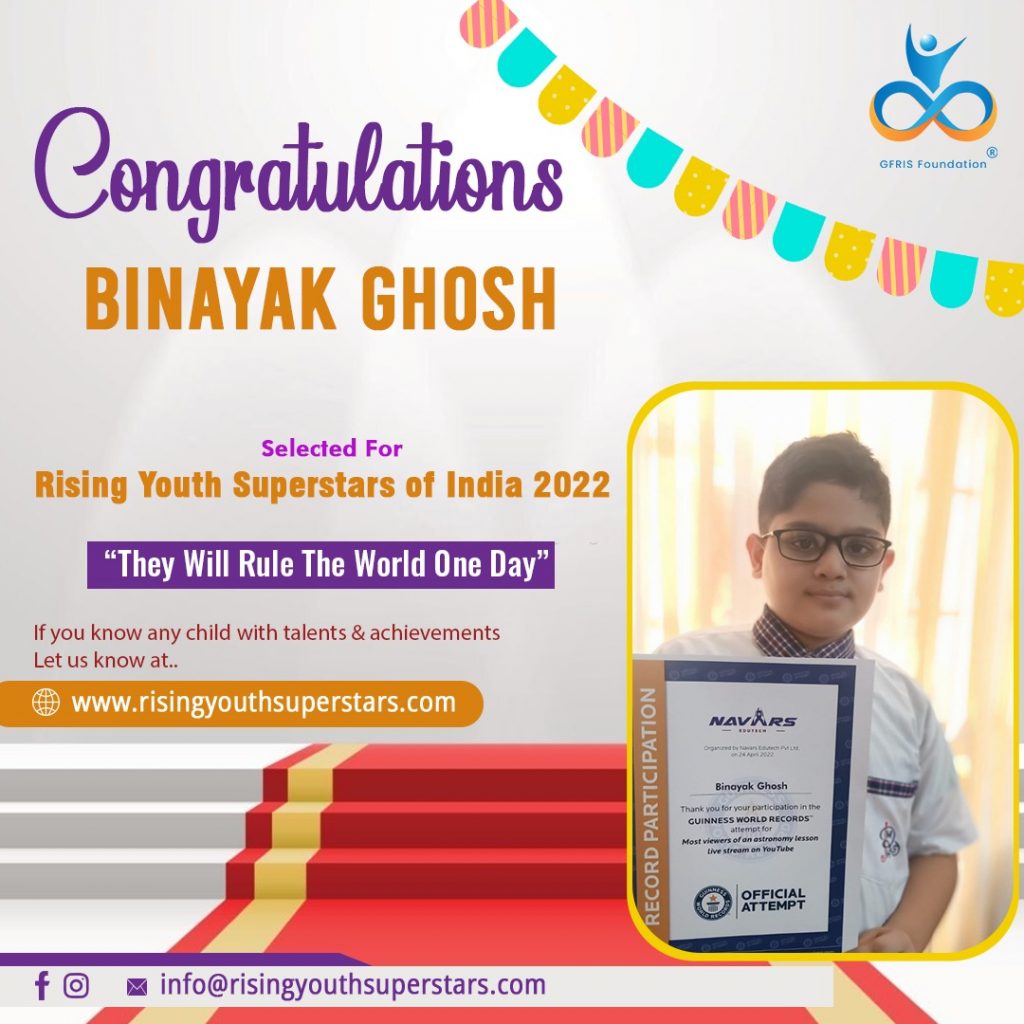 “Equipped with his five senses, man explores the universe around him and calls the adventure Science,” Edwin Hubble said while describing astronomy. The study of the universe is as good as the study of human existence. How the world came into being, why do the sun and the moon shine their glory on us, and many such questions are answered by studying astronomy. A man curious about the stars never lets the sky stop him. Binayak Ghosh is a twelve-year-old boy who dreams of saving the sun when it is destined to collapse in 5 billion years. Born on June 6, 2010, Binayak is the star of his parents’ eyes, Arindam Ghosh and Kumukum Ghosh Chowdhary. The city of Kolkata is where this love story of Binayak and the universe started.

As a child, Binayak used to sit for hours, gazing at the stars, fascinated by their glory. When he started growing up, this curiosity grew with him and he started asking questions. To quench his thirst for knowledge, he became a part of the Space Institute of India, at the tender age of nine. From day one, he made sure he left no stone unturned to satisfy his curiosity. He aced his assignments and made sure that he was making the most of this opportunity.

His first teacher Dr. Vikram Lodhe made sure that Binayak was nurtured and groomed in a way that his curiosity was satisfied and his interest in the subject grew every day. His parents supported Binayak in all his endeavours. They made sure that the environment in which Binayak was growing up was conducive to his success and accommodated for the fact that he was no ordinary child.

Binayak’s teachers at the Rammohan Mission School, Kolkata, well aware of his passion for Astronomy, also ensured that his love for Astronomy and his education go together smoothly without hampering each other.

His family has always been supportive of his endeavours. In the family, Binayak’s elder sister Baivabi, just 13 years old herself, has been his biggest supporter. She is always by his side, helping Binayak whichever way she can.

Binayak has figured out the perfect formula to manage his love for stars and his education. He makes sure that his regular academic life is not affected or neglected by his passion. Binayak is also extraordinary at Karate and is a part of Team India, and holds a black belt since the age of eleven. In Karate, Shihan Gopal Marjit, Binayak’s Karate teacher, is the only person behind his success.

His list of achievements is long, but to mention a few in the field of Astronomy, he has been awarded certificates and medals at the Young Astronomer Programme, the Amateur Astronomer Programme, and the Astronomy Boot Programme along with Telescope Making Programme. Binayak is the holder of a world record in the Guinness Book of Records for The Virtual Mars Colonisation Masonian Project. He has also submitted his thesis paper to CSIR that deals with how to refill the sun with hydrogen and prevent its collapse in 5 billion years. In this paper, he presents a way to save the sun and the entire solar system.

Children are like wet cement and they need to be moulded properly, and with care and caution, to make sure that they turn out to be extraordinary humans. Multiple people in a child’s life – his teachers, parents and mentors – mould the child. Among the people behind the success of this wonder kid, Sourav Maji, Scientist SD, U.R. Rao Satellite Centre, SRO, Bangalore, Department of Space; Ajit Kumar Nath, Scientist and Engineer, SG, DGM – Range Operations (Retd.) Satish Dhawan Space Centre, ISRO and his uncle along with Dr. Lodhe, played a major role. The Chandrayaan 2 project was one of the initiatives of ISRO that made Binayak to dream of becoming an astrophysicist. When you dream of conquering the universe, the Earth becomes a stepping-stone to reach the stars, and Binayak is on the journey of conquering the entire universe by his exploratory endeavours.