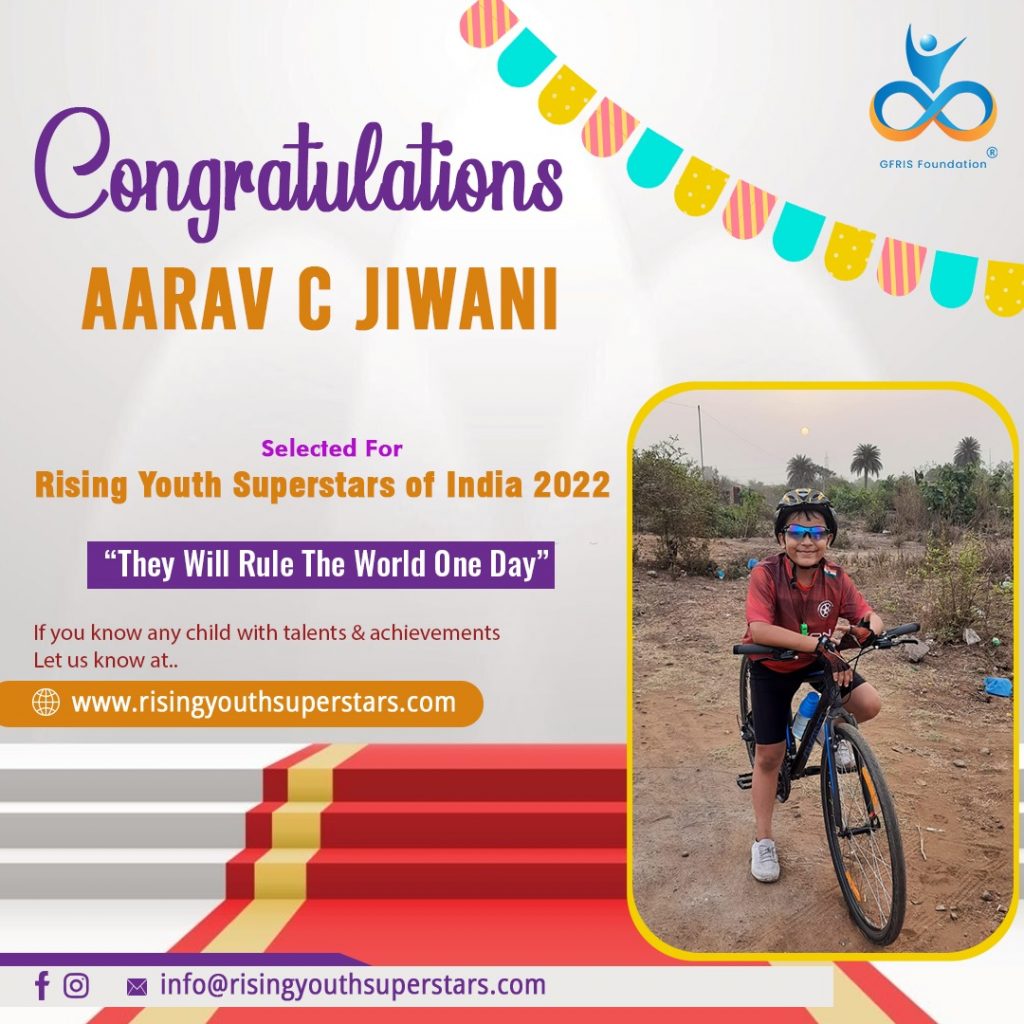 Mumbai-based Aarav Chetan Jiwani, now aged 9, started cycling when he was barely two and a half years old, and completed his first cyclothon in 2015, when he was just four, wherein he rode his bicycle for a continuous stretch of 12 kilometres. Kalyan Cycling Foundation (KCF) organised this cyclothon. Dr. Adwait, the founder of KCF, later went on to become Aarav’s role model and mentor.

Aarav also received unwavering support of his parents Jagruti C. Jiwani and Chetan K. Jiwani. After they noticed how well their son rode the bicycle, they removed the training wheels from the cycle to allow Aarav to gain more control of his balance. Chetan Jiwani is immensely proud of his son’s abilities and supports Aarav with great enthusiasm and energy. Every time Aarav undertakes a long journey on the cycle, his father hops on his own motorcycle and follows him throughout the journey. He cheers for the little champion like a true fan, and ensures the safety of his son throughout the journey. Whenever Aarav cycles for more than a hundred kilometres, his mother too joins in on the ride to motivate and encourage her little champion.

Aarav is a dedicated and hardworking individual. He gets up at 4:00 a.m. for the early morning long rides – whether it is a solo or group ride along with KCF family. He spends nearly two to three hours every day practicing. In extreme scenarios where he is unable to take time out for his practice, he still allocates a minimum of one hour for his practice. He really loves cycling because it allows him to be one with nature.

Aarav is a young prodigy. He is the youngest member of his team to have completed both the 50-kilometre and the 100-kilometre mark. His longest ride was of 132 kilometres, from Kalyan to the Gateway of India. He also likes off-road rides. He loves to ride his hybrid cycle like a road bike rider, racing with speed and enjoys both solo and team rides.

Due to his diligence and passion towards cycling, he is the recipient of several awards and prizes. One of his first wins came when he won in the Under-11 category at a national level MTB Race organized by the Kalyan Cycling Foundation. He participated in the Mumbai Championship Cyclothon and won the second position at the district level, and that too with a non-gear cycle. He has also participated in several events such as Vaisakhi ‘1000 Km National level Cycling Challenge’, Beat the Heat challenge and so on. In all such events, Aarav was the youngest cyclist to have participated. He rode nearly 1265 kilometres over the duration of one month in the ‘Beat the Heat’ challenge. He also completed 300 kilometres in the cycling challenge organised by All India Cycling Association, Bathinda.

Currently, Aarav has 221 National and International trophies, medals, and laurels to his name. An application called “Stava” mentions his profile and contains an extensive list of all his achievements.

Aarav is also a very dedicated student and always tries to score an “A+” in his class. His cycling has never been an obstacle to his academics. He prepares a schedule during the time of examinations and follows a simple trick to focus on his studies. He does not think about cycling when he is studying and does not think about academics when he is out on the road having fun. In the future, Aarav wishes to become a professional cyclist, and his parents too are looking for a coach who would help Aarav achieve his dream.

Apart from cycling, Aarav loves to play cricket, football, and other games. He loves to draw and is interested in gaining religious knowledge, like learning prayers and slokas. With his parents’ blessings on his side along with his dedication and hard work, Aarav is destined for greatness.