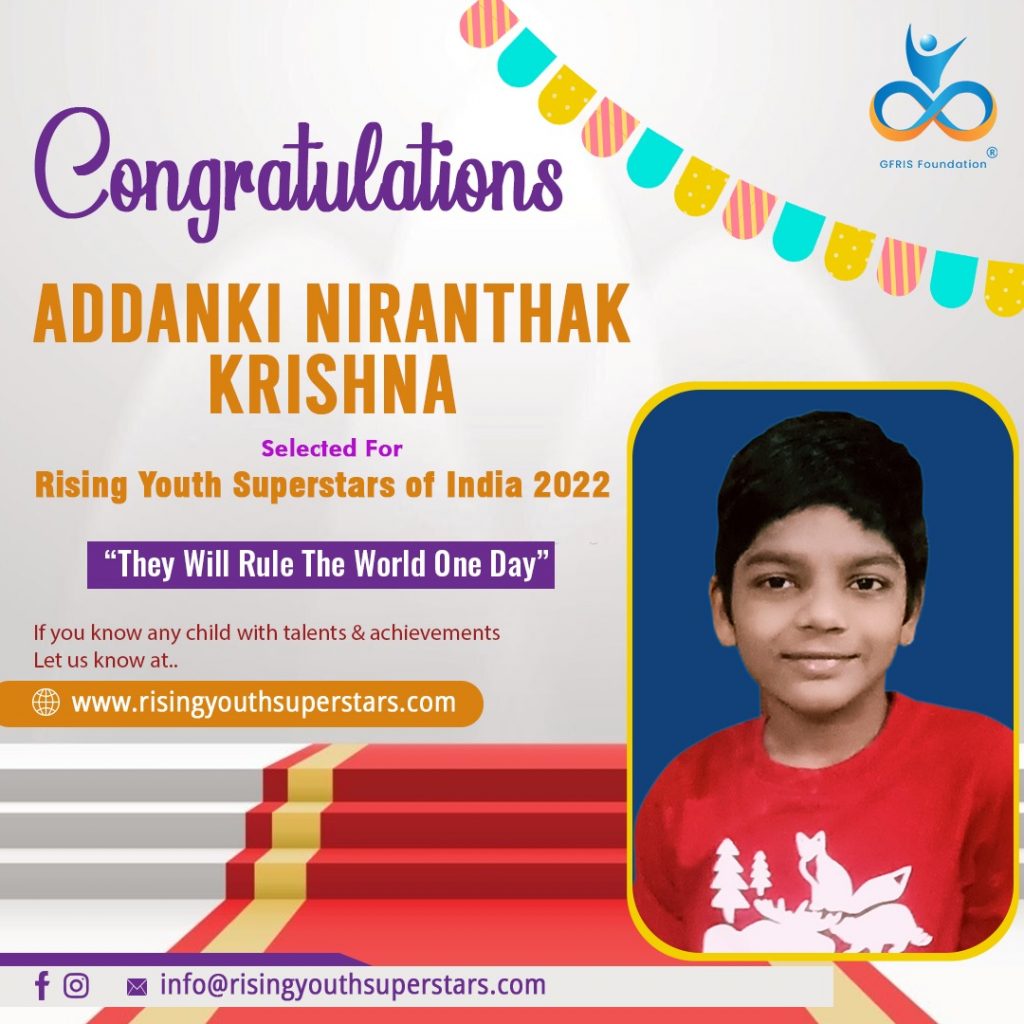 To have an application on the Play Store at the age of eight shows the exceptional talents and skills possessed by YSR District, Andhra Pradesh, based Addaniki Niranthak Krishna. This marvellous eight-year-old spends around 2-3 hours daily, working on his software development skills. His interest in software development began when he was around seven. Niranthak’s curiosity for software development stemmed from the animations and pictorial representations in various YouTube videos. These animations caught his attention, and in no time, he was curious to learn how they operated.

Soon, Niranthak started working towards finding that out. Determined to understand the process of software development, he started asking questions about it. His parents, Addaniki Bala Krishna Prasand and Addaniki Jahnavi noticed his desire to learn and had him enrolled in WhiteHat Jr. classes, which was where he first picked the skills of software development.

Niranthak got unfettered encouragement and support from his family, which includes his parents and his sister, and from the school management and his coding teacher Ashwini. The family always ensured that Niranthak feels motivated to pursue his talents and desires persistently. They never objected to any of his desires to learn software development and always remained supportive and encouraging.

At the tender age of eight, Niranthak has already managed to win several awards and prizes, along with the added achievement of having his own application on the Play Store. Niranthak can also identify 102 country shapes in one minute, and 185 country shapes in 1:45 seconds. Some of his accolades include mentions in the Indian Book of Records and the Worldwide Book of Records. Niranthak also has a game developer certificate from WhiteHat Jr. He has also taken part in several government quizzes, and is the Indian Star Kid Achiever.

Software development is an extensive job and requires a lot of focus, dedication, and practice, along with a lot of mental work, which makes it difficult for a child to pursue this along with academics, and manage to handle both well enough. Niranthak has ensured that he does not compromise one for the other, for which he has made a detailed time table for himself and tries hard to adhere to it.

His parents credit the International Delhi Public School Proddatur for teaching him how to balance academics and extra-curricular activities. Furthermore, they feel that Niranthak himself is pretty good at managing his time quite well, which is because he understands the value of pursuing his passion and also maintaining good grades. Niranthak’s parents feel that it is because Niranthak himself has such an intense interest in software development that giving it long hours do not wear him out in the least, and then with a bit of extra effort, he manages to perform well enough at school, too. Therefore, his constant devotion to both his extracurricular activities and his academics is ensured.

What keeps Niranthak going is his drive to learn as much about software development as he can. He derives pure pleasure out of the activity. He undertook the activity simply out of curiosity and the fact that he gets to learn new and different things every day motivates him. The prospect of being able to create what mesmerizes him is very pleasing to him, which is what fuels his passion.

After having won all the awards mentioned above, Niranthak is now determined to learn coding and game designing to make a mark for himself in the field. Furthermore, he is already pursuing a robotics course at EDURIFIC, which shows his dedication and perseverance, and also reflects his desire to learn as much as he can.

Niranthak has already garnered so many awards and is an accomplished young boy. One can only see a bright and successful future for Niranthak in the years to come.