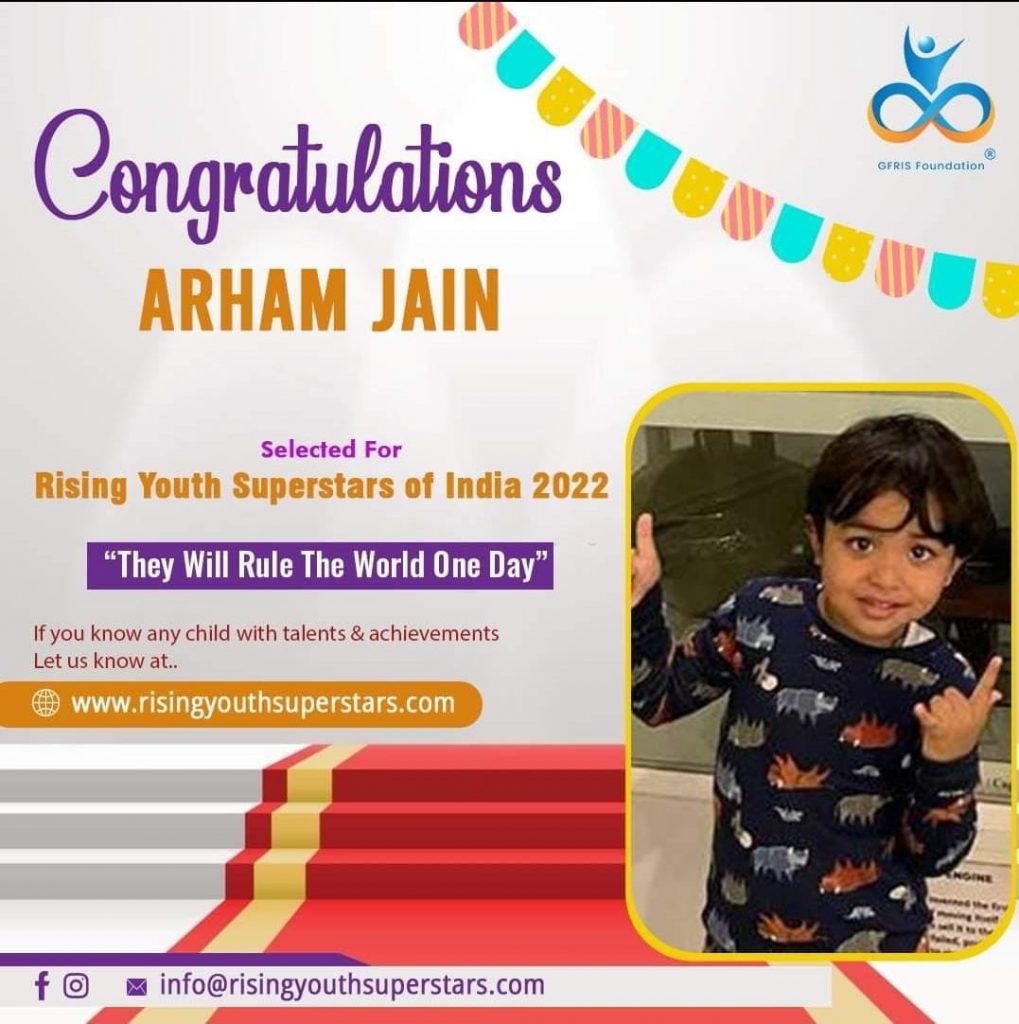 Children are natural explorers. So it’s hardly surprising that Arham Jain has a compulsive urge to poke his little three-year-four-month-old nose into everything, including things that could possibly be of no interest for a child as young, which is usual and which has never ceased to be a source of wonder for his parents ever since he was born on March 13, 2019 in Rewari, Haryana. But, well, that’s Arham for you — a bundle of endless curiosity and limitless potential.

When he was barely six months old, Arham started displaying and extraordinary zeal of finding things out by feeling his way around the workings of small objects and began describing his own take on them in unclear words, which displayed his understanding of the descriptive function of the language, and even though he was yet to master the language, he quickly started picking the words that could best describe what he thought. At that young an age, he was not trying to just make random sounds but was making a deliberate effort to charge them with meaning even though it would take a while before the arrangement of his words took the shape of proper grammatical constructions.

Arham, now a little over three years old, takes keen interest in complex machinery, and is perpetually asking questions about how things such as escalators, home appliances and large construction machines work. It’s not particularly surprising that he is curious about such things and is asking questions about them; what’s surprising is the nature and order of the questions, which display an extraordinary understanding of how to elicit relevant information to piece together the workings of a complicated machinery at an abstract level.

Arham, as a matter of fact, is way too young to even know that one can conceptualize how different parts in a machine function together to make the machine work without actually seeing the parts move together, and yet he does exactly that in his own ways. Often, the questions he puts are poorly constructed, but when they are answered wrong, Arham quickly modifies his question to get the information he needs to make a mental picture of the inner workings of whatever might have captured his attention. And what further surprises many is that despite the shaky grammar, the nouns and verbs, some clearly and some not-so-clearly pronounced, are all there for any competent user of the language to make sense of what the child is actually asking and why, which is very unusual for a kid that young. Not many three-year-olds can do that, or for that matter, are even as curious to know things. Arham loves nature and tries to spend as much time as he can in natural surroundings, which also gives him more questions to ask and more answers to have about nature, too. He also likes riding horses and aspires to become proper horse rider someday. But his list of interests extends to music and dance; play-acting; conducting small experimenting; playing cricket and so on.

When it comes to formal academics, Arham promptly turns academic lessons at school or those given by his parents, Yashvi Jain and Aditya Jain, into games, being the maker of things he is, and goes around playing with them. And soon enough he is done with the lesson, having broken it into different parts and having put the parts back together as though it were a machine to be understood as a sum of its parts by way of reverse engineering. So it’s not surprising that Arham finds mention in Jackhi Book of World Records as “Genius Kid – Star of Flair” for being “a kid with extraordinary grasping power”. This young boy is truly a gift-wrapped bundle of incredible surprises.