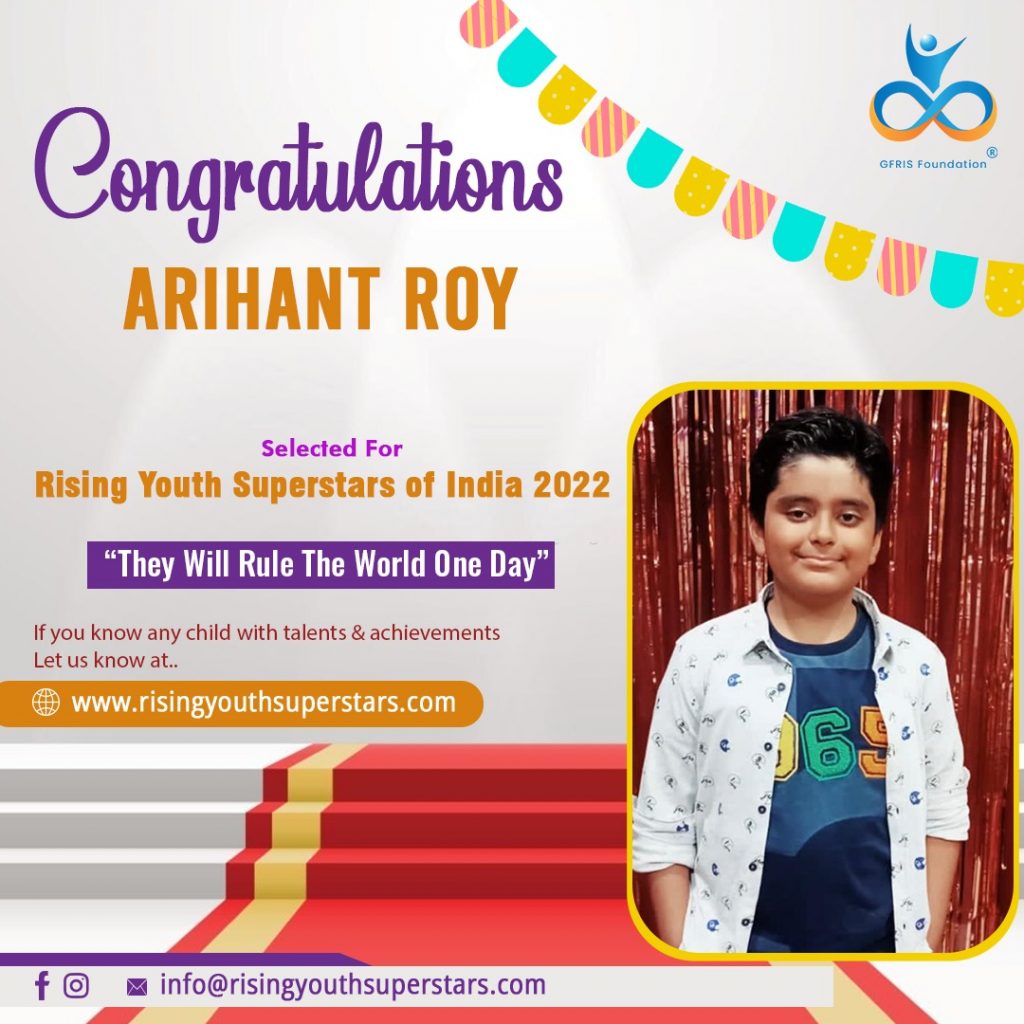 Kolkata-based Arihant Roy started young and has had a steady run ever since. He started practicing math at a young age of six and showed exemplary skills at calculation and other arithmetic functions. It was his mother who first noticed that Arihant had an aptitude for mathematics and ensured unwavering encouragement and support from her end. Currently eleven years old, Arihant has several accolades and achievements to his name – all thanks to his mathematical abilities and a sharp mind.

His family always supported him and encouraged him to work on his mathematical skills. They always ensured that Arihant had the opportunities to work on his skills. His mother has been the most supportive member in the family and was also the one who first noticed that Arihant was very good at mathematics. Family support is crucial for the optimal development of a child and his/her talents, and Arihant is blessed to have been born in such a nurturing and receptive environment. His father, Swarup Roy, and his mother, Monika Roy, have been the ideal parents and have always cared about the fulfillment of their son’s ambitions and his well-being. Arihant was further given valuable coaching and training by Subhra and Urmi Mukherjee, who helped in the nurturing of his god-given aptitude.

Arihant is a steadfast and determined individual, and ensures that he distributes his time judiciously amongst the different activities that he pursues. He also follows a routine where he allocates two to three hours every day, working on Kumon and polishing his math. What drives him to keep working is his desire for doing better. For Arihant, the competition comes from within and his sense of progress motivates him to accelerate his working speed and efficiency.

Arihant has many accomplishments to show for his talent. He has proved his prowess on various platforms such as the SOF Olympiad, the ISTSE, the Spell Bee, the SIP Abacus, and the Indus Valley World School. He has a roadmap in his mind and has immediate plans for his future. Considering his goal-driven nature, he has made short-term goals for immediate fulfillment, which include securing a position in the national level SIP Abacus and the SOF Olympiad. The fact that he has short-term goals, also goes on to show that Arihant is an extensive planner, who is well aware of his capabilities, and can visualise the upcoming wins that he wants for himself.

Arihant first participated in Spell Bee and his latest win was the SOF Olympiad. Apart from the above-mentioned accomplishments, Arihant also displays versatility, as he has involved himself in activities such as swimming and playing the guitar. Moreover, he maintains an extremely good balance between his academics and his extra-mathematical involvements. Considering that math is a part of his academics, he finds no difficulty in engaging himself in both, as they overlap a lot of times. Furthermore, advanced math is bound to help him with higher studies, so that makes it all the more useful for Arihant’s future. Not only is Arihant’s training useful to him as an extra skill, but will also be very helpful in determining his career choices and overall career trajectory. Math is a very important subject in many good, science-based career options. In addition, math is a necessary life skill. Therefore, Arihant is currently a step ahead of his peers when it comes to steering through the course of life.

With such focus, perseverance, and dedication, Arihant is on the path of achieving both his long-term and short-term goals. Moving ahead with sincerity will guarantee that he secures a position in the national level SIP Abacus and SOF Olympiad competitions, and achieves other long-term goals that he has for himself.