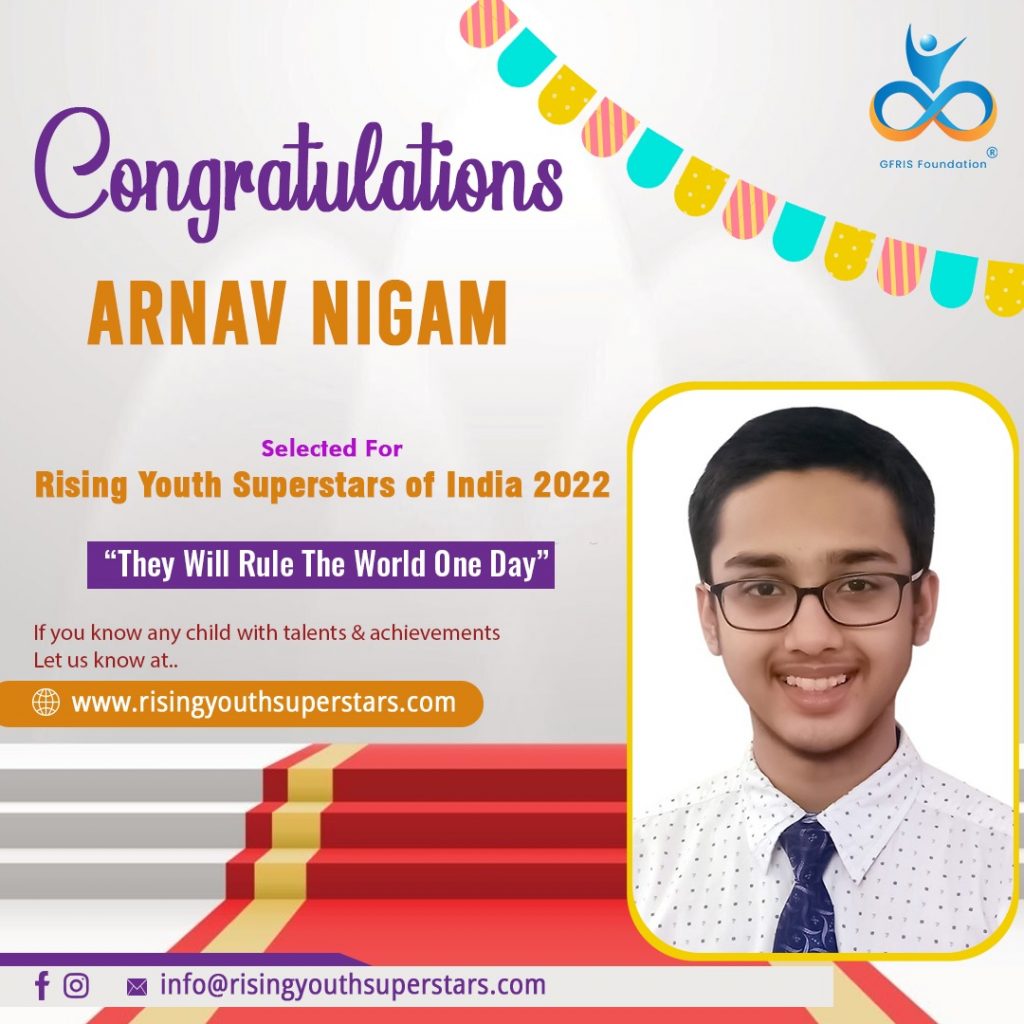 Mumbai based Arnav Nigam started making an impact in academics at the tender age of three. According to his parents, Sanjay Kumar Nigam and Dr. Reena Nigam, Arnav started showing signs of academic excellence ever since he was a year and a half old. At the age of three, he went on to win his first trophy for the “Mask Me” inter-school competition. His intellect was evident in his curiosity to learn. He was inquisitive to the point where he used to get up at 5:30 a.m. just to read books. His learning was not restricted to reading. He could memorize and pronounce even complicated words easily. When his parents noticed the effort he was putting in, they made it their goal to create the most conducive environment for him to flourish.

Arnav always had full support of his family, which includes his parents and his grandparents. Everyone did their bit to support Arnav, who is a multi-faceted and versatile child. Not only does he have a flair for academics, but also devotes his time to his hobbies and passions. Some of Arnav’s hobbies include drawing, painting, and playing the tabla. When it comes to sports, Arnav shows interest in basketball, cricket, and chess.

Arnav draws inspiration mainly from his own accomplishments, like a self-fueling powerhouse. Arnav has received global recognition through various international competitions and events. Some of his achievements include a World Rank 1 in World Mathematics Olympiad and World English Olympiad. He has more than 700 awards and accolades in the form of certificates, medals, trophies, and merit honours. He holds the World Rank 1 in Avogadro Chemistry by the Univesity of Waterloo, Canada. He has bagged gold medals twice in the Homi Bhabha Junior Scientist Exam at different levels. In the Hong-Kong International Mathematical Olympiad, Arnav was given the title of ‘World Star – India’ and ‘World Champion’. Furthermore, he was honoured for academic excellence five times from the Maharashtra and Goa zone for his outstanding and exceptional achievements in Science Olympiad Foundation.

Arnav spends much of his time honing all his skills, interests, and hobbies. Since Arnav is a self-motivated child, he can focus and prioritise his tasks on his own. Seeing such passion and dedication in him, parents and teachers are proud to guide and extend their support for his future endeavours.

His plans for the future not only include his being the best at all he does, but also being able to serve the society and nation to the best of his abilities. Arnav focuses on the present while setting goals and targets for the future. He engages himself in taking small, baby steps that guarantee success. With such intellect, accomplishments, and dedication, Arnav is bound to do great for himself and make his family, society and his country proud.