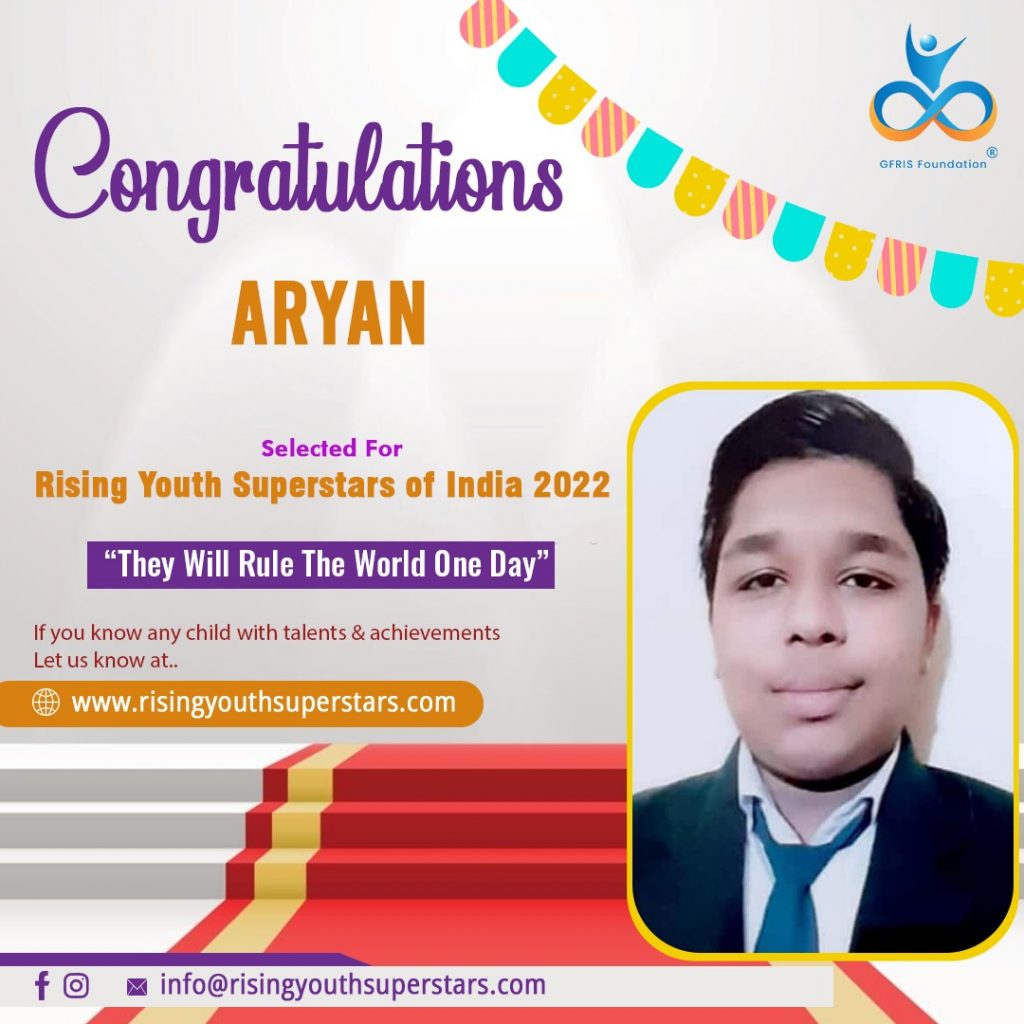 Aryan: The Tale of a True All-Rounder

Geeta Iyengar has very rightly said that “Knowledge has a beginning but no end” and Aryan is a living example of this quote. Since his parents opened the doors of education to him, he has done nothing but excel. From studies to sports to social work, Aryan left no stone unturned to maximize every opportunity presented to him. Supported most by his mother, this miracle baby was born to Mrs. Bhawna Gupta and Mr. Amit Kumar in the small town of Ladwa, Kurukshetra on February 16, 2006.

At the mere age of three, he scored an unbelievable 99%, which made his mother realize that he was a special child. Mrs. Gupta believes that the fact that he won a cash prize after his first competitive exam played a very huge role in pushing him to study more and achieve more, a classic example of positive reinforcement. Aryan was supported by those closest to him – most by his mother, and he had his share of difficulties to battle with, and he won every battle. He is a hardworking boy, who spends almost 16 hours of his day either training or studying, making sure every moment helps him inch towards his ultimate dream.

The driving force behind every successful person is the most important factor to their success and this driving force for Aryan was his parents’ faith in him and their support. Aryan aims to achieve a new height of success every day. Enlisting all of his achievements would take a long time, but to enumerate some from recent years, here are some worth highlighting. He crossed his academic boundaries with extraordinary ranks in ATSE Olympiad-2020 State Rank-1, ATSE Olympiad-2021 AIR-2, Crest IQ Challenge (2021-2022) – International rank-4, Crest Maths Challenge (2021-2022) – North Zone Rank-34, French Word Power (2018) – AIR-14, IOS Olympiad (2020) – Olympiad Rank (International) – 1, ISTSE (2020) – International Rank-1 and SELECT (2021) By Speed Labs – AIR-2.

Aryan also received the medal of genius in the GC Maths Olympiad organised by Genius Cerebrum. He has completed a course of C language from Hartron Centre. Currently, he is working on Silicon Valley Challenge Project organised by WhiteHat Jr.

He did not stop here and does not plan to either. He has also worked with NGOs and has done so much for a sixteen-year-old boy that he is the true definition of an all-rounder. He was also honored with Matribhumi Yuva Gaurav Samman. With numerous feathers in his cap at such a young age, Aryan seems to have figured out the art of balancing all aspects of his life. He manages studies, co-curricular, and extracurricular activities with perfect harmony, making sure every part of his life is given optimum importance. A student of Delhi Public School, Aryan aspires to clear JEE with flying colours and also plans to apply to universities abroad.

This is just the beginning of the journey for Aryan, and the sky is the limit. For such a bright boy, there is nothing but growth in the future. Aryan looks at a very thriving life ahead and hopes to fulfil all his parents’ dreams.