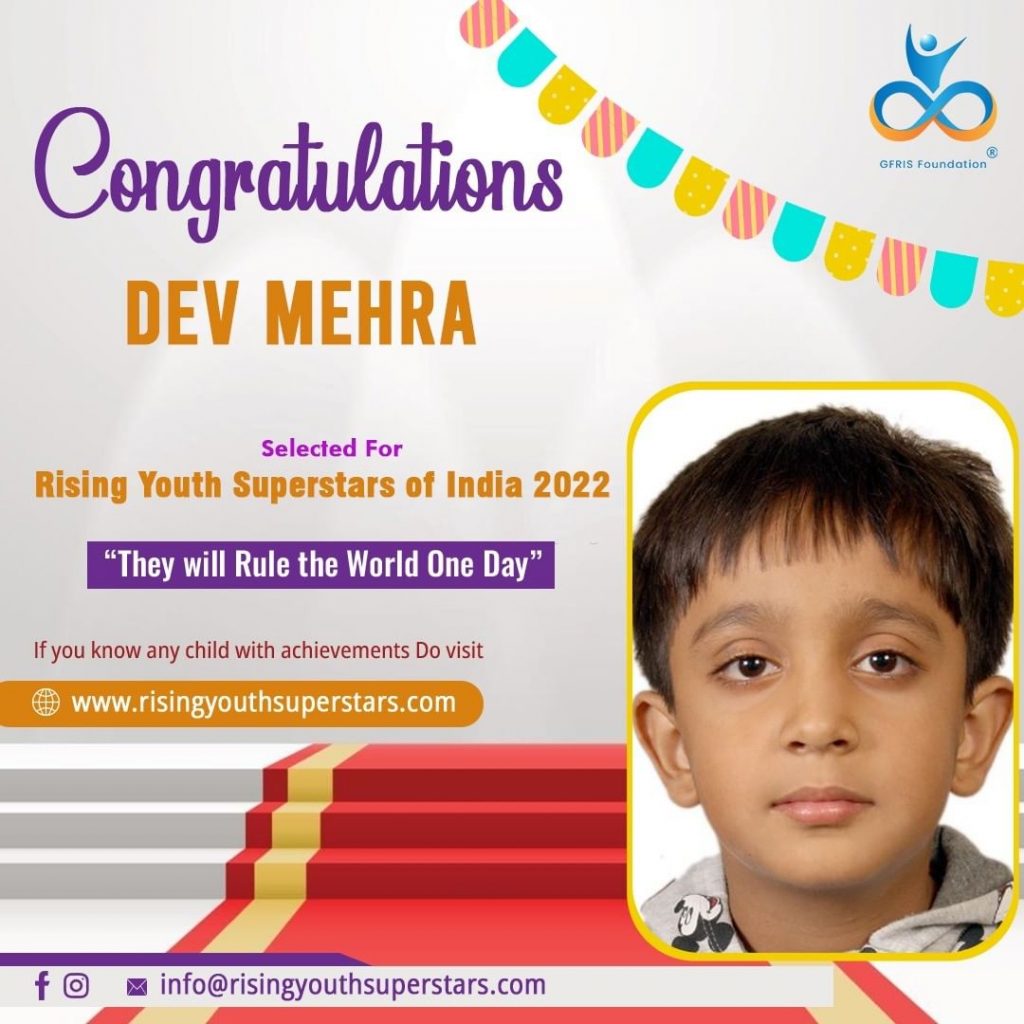 Cricket is akin to a religion in India, with millions of ardent followers of the game, and the organization of cricket in India is such that the players have to start young so that their skills could be shaped easily and better. This approach has produced a large bunch of incredibly talented young cricketers. One such rising star is Dev Mehra.

Born in Delhi on February 23, 2009, to Divya and Amit Mehra, Dev is a promising all-rounder in the world of cricket. All-rounders such as Dev are invaluable assets to the team because they can do wonders with both bat and ball, and if the tail-enders in a team can lift the tally of runs for a team, the hope is not lost when the middle order collapses, as it sometimes happens. The presence of all-rounders provides better depth to the batting order, and keeps the hopes of the team alive until the last wicket falls. Dev has been the match-winner for his team on numerous occasions, with both bat and ball, and sometimes with both, which explains the large number of awards he has managed to garner. Over the years, Dev has grabbed over 70 trophies in the game, including Man of the match, Man of the tournament, Best Batsman and Best Bowler trophies. He is currently playing in the Under-16 DDCA League Tournament.

All of it started at the tender age of five. When most other children are just learning to read and write, Dev picked up a cricket bat, intent on following in the footsteps of his idol Virat Kohli.

In Mehra family, watching cricket is a family affair. If there is a cricket match scheduled for the day, the entire family plans their day around it. So it was during the 2014 ICC World T20, held in Bangladesh. Dev was glued to the television, watching the game intently, following every ball, cheering at every boundary or wicket. This did not go unnoticed. Dev’s mother, Divya Mehra, was watching her child’s passion for the game with interest.

With a supportive family behind them, the Mehra couple work as a team in all aspects of life. It was the same when it came to the aspirations of their child. Amit and Divya worked together to encourage Dev to follow his dreams. A proper cricketing kit soon replaced toys and Dev joined cricket coaching. With passion for the game already on his side, Dev started learning the nuances of cricket. With the able guidance of his coaches, he started honing his skills until it became almost second nature to him. He developed as both a batsman and bowler and became skilled at both.

Quite soon, he was called upon to put his skills to the test in cricket competitions and tournaments. With a hunger to prove himself and primed for success, he proved his mettle time and again, earning awards and accolades for his performances. Numerous times, he was the top contributor in his team’s success and won ‘Man of the Match’, ‘Best Bowler’ or ‘Best Batsman’ awards.

Most people, when they look at Dev, only see the success he has achieved at such a young age. Few people take time to appreciate what lies behind the success. Dev is an incredibly hardworking and passionate kid, with a great support network behind him. Dev toils on the cricket field for five-six hours every day, practicing and polishing his skills. In all this, he has not neglected his studies either. He always strives to finish his class-work and homework in school itself to save time for his cricket practice. In school too, his teachers understand and support him, adjusting their teaching schedule whenever necessary to help Dev chase his dreams. With such dedication, hard work, skills and support, it is only a matter of time before Dev realizes his dreams.