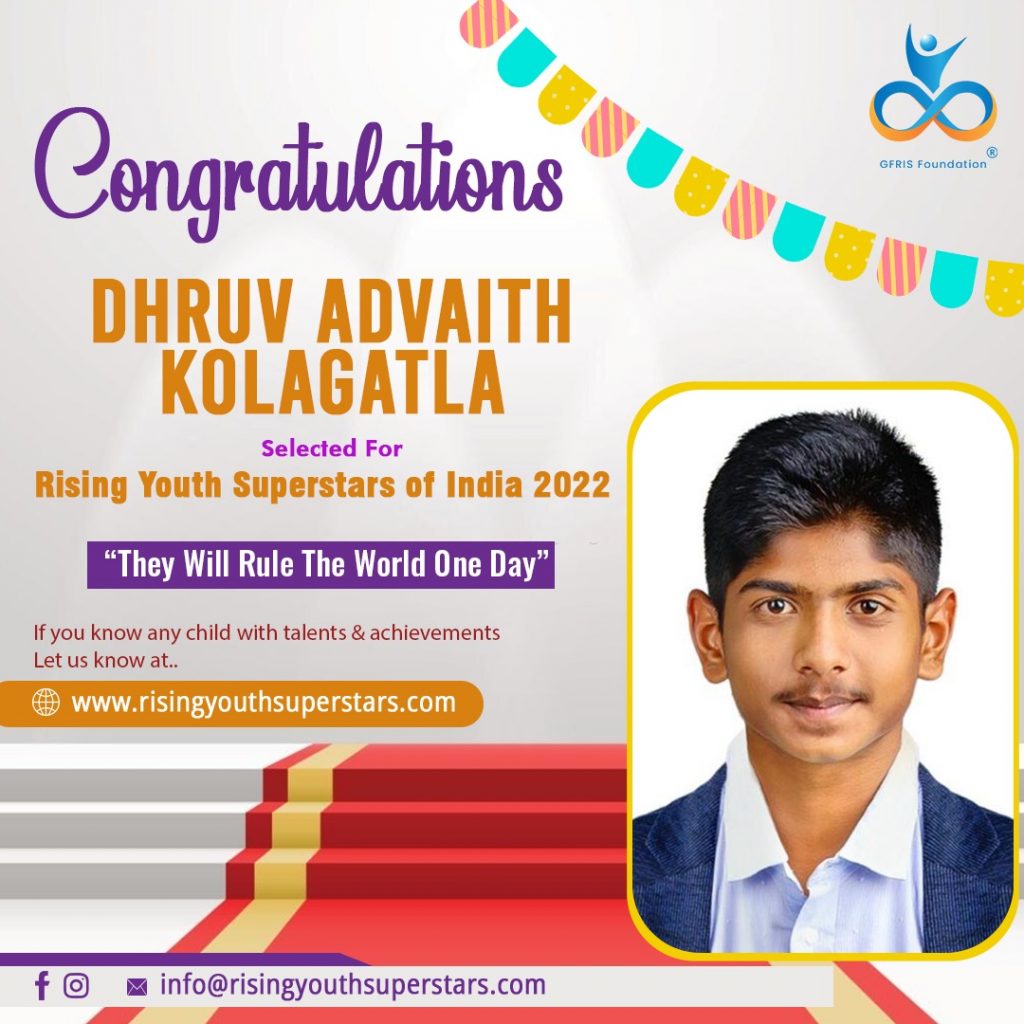 Seventeen-year-old Dhruv Advaith Kolagatla is bundle of assorted surprises; a dynamic sportsperson on the one hand and a responsible member of the community on the other, serving his community with the same passion that he brings to his game, not to mention the selfless spirit that might put any public figure to shame.
His parents, Dr. Aparna and Madhu Kolagatla, noticed their son’s strength, stamina and diligence at the tender age of three, which convinced them of their son’s potential to excel at sports. By the time Dhruv was six, his parents were already taking him to the tennis courts to imbibe the game. Dhruv started fiddling and experimenting with the racquet and the ball, and his initiation into the game was complete. The boy would no longer be anything less than extraordinary thenceforth.
Dhruv has always had an unwavering support of the family. While his parents are pillars of strength and support for him, his grandmother also does her bit to encourage and support Dhruv.
Although there has been gushing family support to Dhruv in his pursuit of playing better tennis, his parents also ensured that the balance between the curricular and the extra-curricular was consistently maintained for a holistic development. And Dhruv has managed to do it, for which he deserves equal credit.
Dhruv has already received several honours, titles and awards at such a young age. He has been Youth Ambassador, Climate Counsellor, and the Social Law Youth Initiative Ambassador during his middle school; held the position of the Pure Youth, USA – Vizag Chapter Director; been Student Cabinet Sports Secretary twice, and so on.
Dhruv stood at an all-India #6 in the AITA (All India Tennis Association) ranking for under-12 Boys Category, and is the youngest player in India to qualify and play the Road To Wimbledon Championship. He has won several talent and championship series and has played the National Tennis Championship thrice. He has been awarded the “All-Round Excellence” award from CIRS, Coimbatore, Tamil Nadu, and has also held the position of the Captain of the Khelo India AP team. Dhruv is, by all means, an accomplished tennis player.
Let’s stop here with this never-ending list of achievements and accolades. Suffice it to say he has more than enough recognition to show for his immense talent.
His passion for the sport is Dhurv’s primary driver and a close second might be his dream of joining Harvard University and play for the prestigious institution. What drives Dhruv to engage with the society and social causes as deeply as he does is his concern for his fellow human beings and a desire to give back to the society in some measure, which explains his ‘knowledge sharing’ with the peers and igniting young minds of rural school kids on renewable sources of energy.
He passionately participated in such social work as book donation drives, social work organized by several NGOs, and other community service activities. Even at the peak of the COVID-19 pandemic, Dhruv participated in social work as much as he could, given the constraints. He and his team donated close to one Lac books and set up libraries in orphanages and for the underprivileged children. He looks upon the members of the society as his own extended family, and thinks of the kids his age as his brothers and sisters, which motivates him to contribute towards making their lives better.
Dhruv could not have achieved all that he has, if he was not excellent at time management. He realizes that academics cannot take a backseat either, especially when he dreams of joining Harvard, which is why he pays equal and uncompromising attention to his studies.
Dhruv is not just an excellent tennis player or a studious boy, for he is best defined by his desire to contribute to the betterment of all, which is a rare attribute in a fellow as young, and that should see him to greatness as he grows and rises.