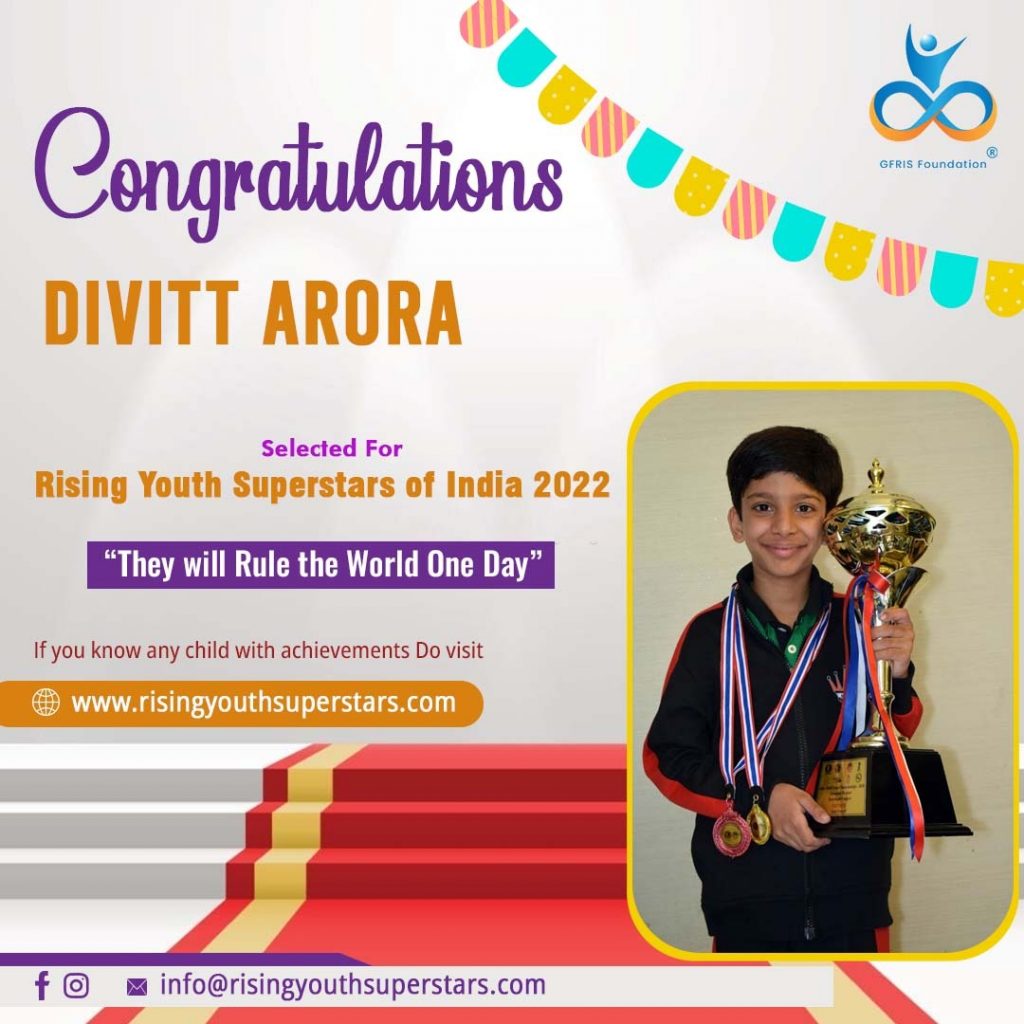 Divitt Arora: A Master Mover of the Chess Pieces

Eleven-year-old Divitt Arora is a rising star in the field of Chess. Starting at a tender age of six, Divitt has been winning awards and accolades in both National and International Chess competitions. A promising player from India in his age category, Divitt currently holds the FIDE Rating of 1876.

A student of G.D. Goenka Public School, Vasant Kunj, Divitt was born in Delhi, on July 13th, 2010, to Ridhima and Anubhavv Arora. He initially wanted to be a football player. Introduced to chess by his father, he took to it like a duck to water. Once he learned all the ropes, he was unstoppable. He first bested his father, who did not take long to realise where the boy’s talents lay. Thus began the journey full of future promises and achievements into the world of competitive Chess.

Appropriately, for his age, his first Chess award as a six-year-old was the Youngest Boy Award at the Braingame Chess Academy Tournament. He position kept rising until he came 2nd in the Under-8 category at the Braingame Chess Academy the same year. He again came second at the Delhi State U-7 Open Chess Tournament 2017. Next year, Divitt came 1th for the first time, in the Under-7 category, at the Anniversary Cup Tournament, held in Ghaziabad, Uttar Pradesh.

Divitt’s first international victory came in 2018 at the Asian Youth Chess Championship 2018-Rapid, in Thailand. Here he won the gold medal, being the winner of Team Rapid- India, in the U-8 category. His second gold medal came the same year in the U-11 category at the CBSE Inter School Sports & Games Competition 2018.

By 2018-19, Divitt became a regular participant in chess tournaments, frequently achieving top positions. In 2018, some of the notable tournaments he participated in were: Dolphin Chess Tournament, held in January, where he came second; third rank in 3rd Indus Cup Chess Tournament and winning the silver medal in Dolphin Chess Championship 2018, held in October, the same year.

In the Czech Republic, he participated in the Czech Open 2019, the Summer Prague Open and the Olomouc Chess Summer Chess Tournament 2019. In Spain, he took part in the Elllobregat Tournament Chess, held in Barcelona, and the Sunway Sitges Chess Tournament at the beautiful beach town of Sitges.

Behind every successful man is a woman. In Divitt’s case, it is his mother Ridhima, who is completely dedicated to advancing his career. She coordinates with all the coaches and takes Divitt alone to all national and international tournaments, which often entails living abroad, away from family for months at a time.

In 2020-21, when the pandemic forced Chess Tournaments online, Divitt consistently maintained topmost positions. He participated in the Instit Municipal Deportes Ush Arena, held online in Argentina, both in 2020 and 2021, coming third the first time and clinching the first position the second time.

At the recently held Delhi State Under-12 Open Chess Championship 2022, Divitt again showed his class by grabbing the first position.

As he hones his skills and gains competitive chess experience, Divitt’s graph is only going to rise with time. The future of Chess in India looks bright in the hands of prodigies like Divitt.