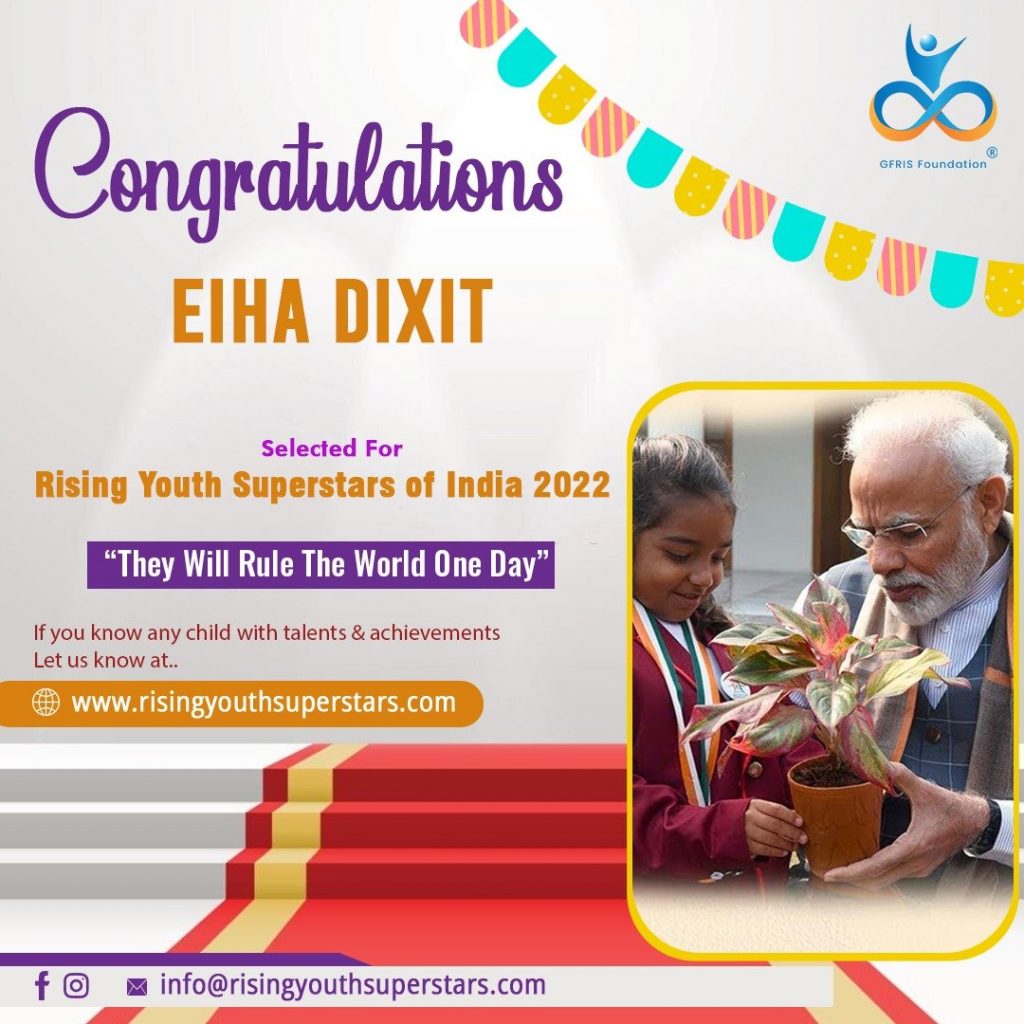 While there are many incredibly talented and wonderful children out there, seldom does one come across a kid as inspirational as nine-year-old Eiha Dixit. Her Meerut-based parents, Kuldeep Sharma and Anjali Sharma, are blessed to have a child as zestful and spirited as Eiha. At the extremely young age of four, Eiha expressed her desire to plant saplings. While at first it came off as a childish wish, Eiha’s family later conceded to her repeated requests and unwavering desire to plant a sapling. The lemon plant that Eiha first planted is still growing, along with her, in the house.

While this in itself would have been a short anecdote, Eiha’s father went on to notice two things about his daughter – that his daughter is passionate about planting trees, and that once she sets her mind to something, she becomes quite adamant and distracting her from said goal becomes nearly impossible. And this quality, along with her passion, makes her a source of inspiration for everyone who wants to contribute to the environment.

If a five-year-old can plant 1008 saplings merely as a birthday celebration, anyone can step up for the cause and add to the greenery of the world. As for Eiha, this does not merely reflect her passion, but also shows her leadership skills. When Eiha planted 1008 saplings at the Medical College, Meerut, many other children, who were mere witnesses earlier, came along to help her. And from this incident, stemmed the Green Eiha Smile Club. Headed by Eiha, the club took the responsibility of going to different areas of Meerut to plant saplings every Sunday. July 2022 marks more than four years of the operation of the club. In this duration, Eiha has planted more than 12 thousands plants at various places in India.

Googling Eiha presents many results, one of which is a photograph with the Prime Minister of India, Narendra Modi. A proud moment indeed, Eiha earned this photograph due to her extremely significant contributions to the environment. Her work is quite extensive and the importance of her initiative cannot be highlighted enough. Some of her major initiatives include an Eiha Plant Bank, several plantation drives, and spreading environmental awareness through various campaigns. The plant bank invites people to donate saplings and also gives out free saplings to individuals who wish to plant them. The amount of attention and heart that she pours into her work is reflected in the fact that she does not even throw the seeds of any fruits that she consumes. Eiha stores these seeds and sows them.

Eiha’s initiatives have rewarded her with some really honourable and memorable moments and laurels. She has been selected by the Central Government as the ‘Youngest Social Worker of the Country’ and has had the pleasure of receiving the Prime Minister’s National Children’s Award. Eiha is the youngest in the country to have received this award. Apart from this, BBC Compacta and BPB publications have included Eiha’s contributions as a part of their curriculum for classes VIIth and IXth of CBSE. She has received the Green India Award from the Governor of Uttarakhand and has several other awards from several other governments and ministries. She has received the Water Hero Award by Jal Shakti Ministry. Eiha also participated in the Asia World Youth Summit 2022, held in Indonesia.

When it comes to her academic life, Eiha is a focussed individual and has secured state level ranks in English, Mathematics and General Knowledge Olympiad. She has a lot of certificates in the field of dancing and has also won a silver medal at the Mathematics Olympiad. Her future plans include taking further quality initiatives for the environment. She has already set up the foundations for her upcoming projects and will easily take her work to the national level, considering the pace at which it is growing right now.

A child like Eiha is a blessing, not only for her parents, but also for the world in general. She is a true friend of the environment and her initiatives will guarantee a better world for the upcoming generations.