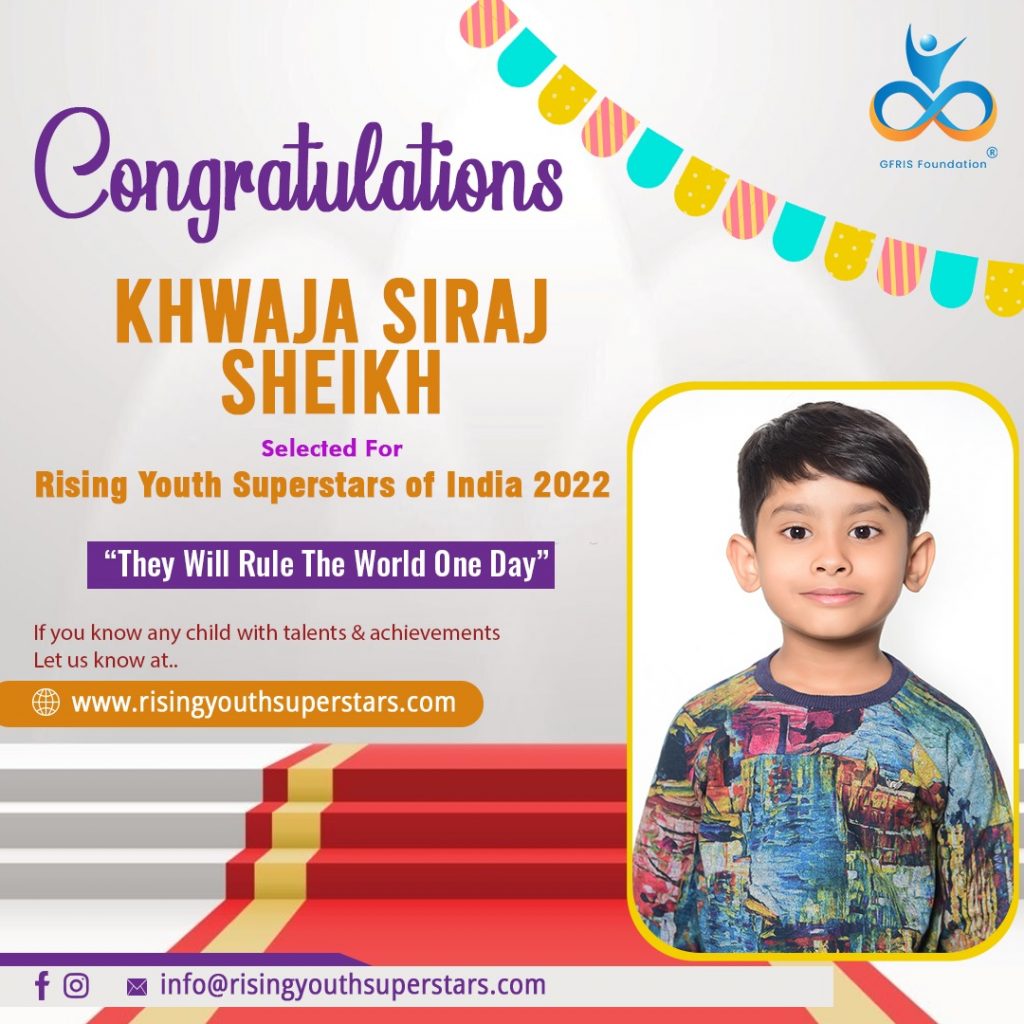 LEGO could never have been more instrumental in helping a child develop a passion for drawing, art and craft. However, for the six-year-old Khwaja Sheikh, they were literally the building blocks of his dreams and aspirations. Khwaja first displayed his interest in arts and craft at the age of four. This was when his mother first noticed his exceptional skill at putting his ideas on paper. Impressed by her son’s capabilities, Khwaja’s mother, Zoya Sheikh, got him admitted to drawing classes where Khwaja started working on his talents.

Khwaja’s mother stayed with him for most of the time. Therefore, it was natural that for Khwaja she was the most supportive and encouraging figure. She, along with the rest of the family, always motivated little Khwaja to pursue his dreams and polish his skills relentlessly. His coach Ashwini Mukundwar has also been supportive of his talent and has played an instrumental role in helping him polish his skills.

Khwaja always received support and encouragement from his family. His parents ensured that Khwaja always finds the space and the motivation to pursue his creative and vivid imagination. For an artist/designer, the development of a vivid imagination is of utmost importance. Therefore, Khwaja’s parents also make sure that their son gets the right environment to develop an imaginative bent of mind.

What is more inspirational is that for Khwaja, it is not simply a pursuit of his own interests. He has a plan ahead of him. Khwaja loves to draw buildings and likes playing with LEGO, the plastic construction toys. Therefore, the dream of becoming an architect comes naturally to him. His father Siraj Sheikh is proud of the fact that Khwaja is more
concerned about his future than he is. Usually parents are after their children to decide what they want to be in life. Therefore, it is extraordinary that even at such a young age Khwaja has a clear picture of his future. Khwaja’s parents feel secure about the fact that their son has the understanding of how important a good career option is.

Khwaja also works on polishing his skills regularly. He devotes an hour every day to his drawing classes. Apart from that, he makes anything that he wishes to for the rest of the day. Currently, his academic workload is not excessive. Therefore, it is relatively easy for Khwaja to get the space and the time required to work on his skills.

The awards he has won for himself also reflect the potential of his creativity. He has been included in the list of Top 100 Child Prodigies Over The World and given a Global Child Prodigy Award. He has also been given the “Child Prodigy” award by Shamrock School, Mohali. Furthermore, he was nominated for the National Kids Excellence Award (NKEA), 2022. Therefore, it would not be wrong to conclude that Khwaja seems to have a bright future ahead of him.

Apart from Khwaja’s specific skill set, his parents rightly feel the need to ensure his overall development as well. Therefore, they ensure that as Khwaja grows, he also realizes the importance of a good academic score, his religious studies, as well as his health and fitness. To promote his overall development, they encourage Khwaja to pursue skating and karate. Khwaja is also enrolled in swimming classes. All of these will ensure that in the long run, Khwaja becomes a perfectly balanced individual with exceptional talent and skills.

Considering his achievements, his own maturity and understanding of the world at such young age, Khwaja is sure to achieve many more things than he has achieved in the time to come. He certainly has a bright future ahead of him and this certified child prodigy has everything it takes to become successful.