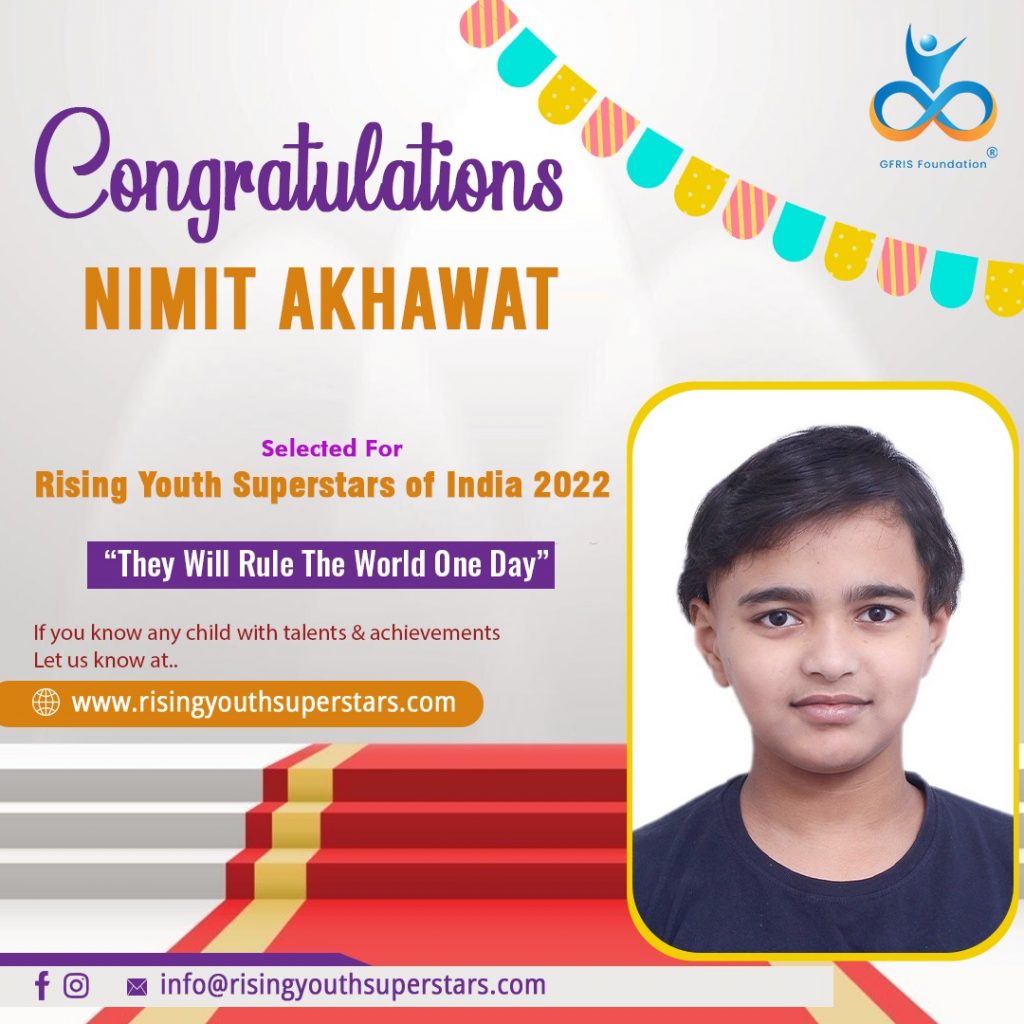 Soaring ambitions and unending inquisitiveness are two defining characteristics of Bengaluru-based Nimit Akhawat. Born in 2011 to Prashant Akhawat and Shalini Akhawat, Nimit is a Greenwood High International School, IB Campus, Sarjapur, Bengaluru student. Nimit’s aspirations stemmed from a vacation he took at the age of eight,when Nimit visited his grandfather.He was utterly in awe of anything and everything related to medical science. His grandfather, a retired surgeon by profession, used to engage Nimit in discussions about various diseases, their symptoms, and their treatments. Nimit also used to observe consultation sessions between his grandfather and his patients.

After a point, it became quite noticeable that Nimit was inclined towards medical science. For his ninth birthday, his father gifted him two books – “The Human Body Book” and “The Human Brain Book”. By the age of nine, Nimit had involved himself in online medical science courses.

When Leonardo da Vinci was approached by Della Torre to draw a human body as an illustration for a text, Da Vinci drew more than ten human bodies (despite the death of Della Torre) merely out of his curiosity to learn about the human anatomy. Da Vinci’s work in the medical field is considered unrivalled even today. Nimit’sendeavour to educate himself in the field of medicine is reminiscent of Da Vinci’s own endeavour to learn about and contribute to the field of medicine. He is surely a little Leonardo in his own capacity.

Nimit proved his diligence by pursuing an extensive quest to learn more about various medical science disciplines such as gross anatomy, physiology, neuro-anatomy, neuro-physiology, biochemistry, microbiology, and cardiology. He engaged himself for nearly four hours a day, studying online lectures from Khan Academy, Dr Najeeb and Dr John Campbell, all by himself. This proved not only his unending curiosity but also his resolute determination to learn.

The inspiration and support further fueled Nimit’s willingness to learn more that he drew from his family members. His guiding light was his grandfather, who taught him a lot about medical science and used to encourage him to learn as much as he could. His parents supported him by providing him with all the opportunities to enhance his learning. From getting him books to getting him enrolled in online lectures, his parents have done everything to encourage him. Nimit also received considerable support from his school principal, Aloysius D’mello, who ensured that Nimit had a platform to display his talent.

Owing to his own efforts and the support of his family, Nimit secured the 9th rank at the National Level Intelligence Plus Innoventure in 2022. He has in-depth knowledge of Neuro-Anatomy and Neuro-Physiology, Anatomy and Physiology of the Head, Neck, and Eye, Cardiology and several other disciplines. Nimit wishes to commit himself to cancer research. He plans to research the biological processes involved in the onset of cancer, its growth and spread in the body. With this research, he wants to develop targeted treatment and prevention strategies and possibly develop a cancer treatment drug. He has already started working towards his ambition by engaging himself in the study of chemistry,biochemistry, pharmacology and molecular biology.Moreover, he is also learning python, mathematics and statistics to apply them in his research.

Nimit is not all work and no play. He loves to play tennis and cricket in his free time. He is also a highly disciplined student and manages his academics efficiently. To spread awareness, Nimit also started his YouTube channel – Medical Learning with Nimit Akhawat – where he shares his learning about medical science and its latest developments.

His ambitions are inspirational and wouldgreatly benefit society whenrealized. At the tender age of eleven, Nimit is a great source of inspiration.He woulddefinitely go on to achievehis dreams one day. Just like Da Vinci, this little Leonardo’s work too shall stand unrivalled someday.