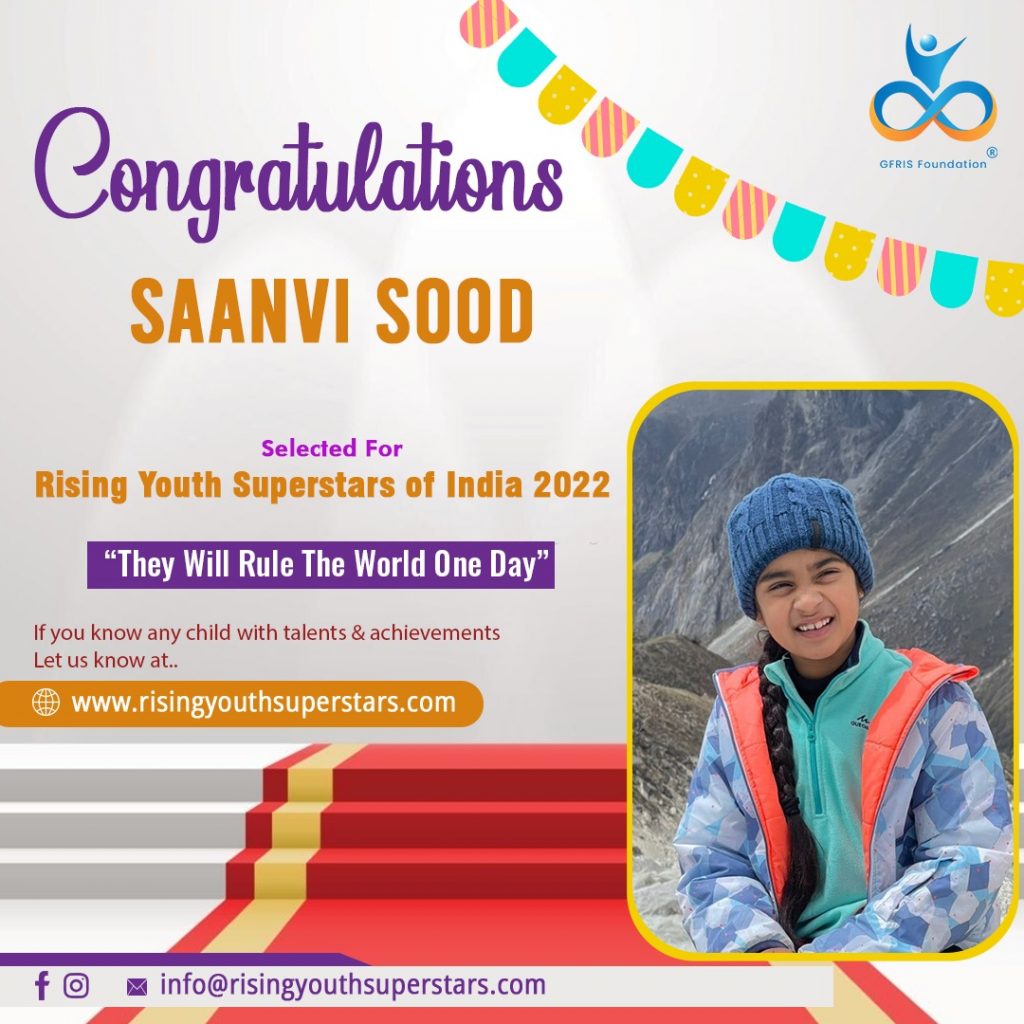 Saanvi: The Future Queen of the Seven Summits

Thousands of people visit the Vaishno Devi Temple and the Kedarnath Temple on a daily basis. When Deepak Sood took his four-year-old daughter to Vaishno Devi, only to see that she was way ahead of the rest of the family and was not even short of breath, he realised that she had exceptional stamina and unmatched confidence and passion for trekking. This was how the journey of Saanvi Sood, a Ropar-based seven-year-old girl, and a Class-II student of Yadvindra Public School, started in the field of trekking.

At an age where kids these days tend to laze around and relax, Saanvi simply loves to undertake extensive physical activities such as cycling, sprinting, martial arts, and skating. Her inspiration comes from her roots, grandfather Surinder Kumar Sood and father Deepak Sood, who himself exercises intensively and is often involved in various Hydro Projects in different States. When Saanvi’s father used to go trekking, Saanvi would feel quite motivated and inspired to follow her father’s example and undertake the same activity, having been born with a good stamina and a flair for athletic, physical endeavours.

Her father being her inspiration to undertake trekking as a hobby, it was natural for him to be supportive and encouraging of his daughter’s activities. Even otherwise, Saanvi never faced any opposition from her family. It was natural for her mother, Geetika Sood, to be concerned about her health. After all, she is just a kid with the desire to conquer the highest of mountain peaks, but her small physical size and age have never been accurately indicative of her incredible motivation, focus, and dedication. Not only does she dream of conquering several challenging peaks, but she also puts effort into training her body for intensive physical exertion. She does so by undertaking numerous physical activities such as skating, martial arts and sprinting. These activities keep her in shape and keep her endurance level at its peak.

This June, Saanvi was featured in the Times of India and several other famous newspapers and blogs. Saanvi, at the bare age of seven, created history when she scaled the Mount Everest Base Camp and became the youngest Indian girl ever to have done so. Saanvi’s inspiration for achieving such great feats comes from her dream to hoist the Indian Flag on all the seven highest summits in the seven continents of the world as early as possible, hopefully in the teenage years of her life. One truly inspirational fact about her is that her effort is clearly directed towards her goal and at such a tender age, she has the capability to focus solely and unswervingly on the target she has set for herself. She loves to explore mountain areas and their ridges, and slopes. To prepare her body for this, she cycles, or runs, for one continuous hour every day.

When it comes to academics, Saanvi is as committed as she is to her physical endeavours. She has held either of the first two ranks of her class every year and

manages her time effectively. She keeps her physical activities at bay when she is studying and then takes time out for them when she has successfully carried out her academic responsibilities. She is also occupied with a number of other extracurricular activities and is very good at artwork, singing, skating, and martial arts.

Saanvi’s journey until now has been nothing less than inspirational. With such focus and commitment, she is bound to conquer the highest peaks in the seven continents of the world and take her rightful place as the Queen of the Seven Summits.