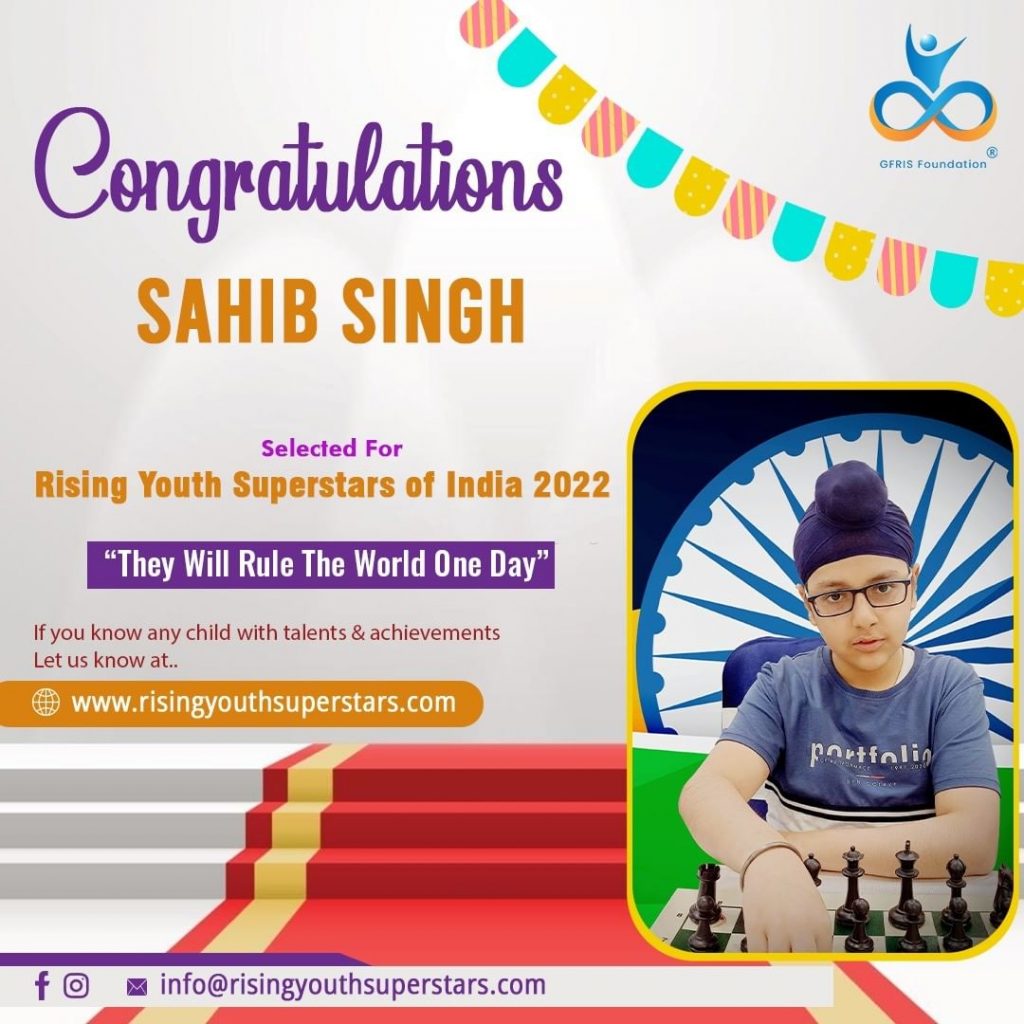 With 150+ certificates and more than 25 noteworthy achievements, Delhi-based Sahib Singh started showing remarkable talent in the game of chess at the age of seven. Currently 13-years-old, Sahib Singh started participating and achieving notable successes and awards since 2015.

Arbaz Khan, Sahib Singh’s school chess coach, was the first to notice his flair for the game. Since then, Sahib has received able guidance and support in honing his skills in chess.

In terms of family support, Sahib was encouraged by both his parents, Tajinder Singh and Gurpreet Kaur. He was encouraged the most by his father who ensured that Sahib gets suitable opportunities to work on and develop his talent. While there was some doubt and opposition in the initial stages, all of it waned away with time. Sometimes, it becomes difficult to rely on an extra-curricular talent for parents who might feel that the academics hold more importance. However, Sahib, with his dedication and perseverance, was able to prove to his family that he possesses extraordinary talents and skills.

Talent in itself does not guarantee success. It needs to be polished and worked upon. Therefore, focus and perseverance are equally important. Sahib displays all these qualities as he spends 2-4 hours learning various techniques of chess on a daily basis. What drives him to put so much effort is his dream of becoming a Grandmaster, which is the highest title a chess player can attain and is bestowed upon a player by the International Chess Federation (FIDE). Vishwanathan Anand is one of the most famous Indians to hold the title among a total of 74 Indian Grandmasters. Another famous Indian Grandmaster is Vidit Gujrathi.

At the young age of 13, Sahib holds several noteworthy awards and achievements. In 2016 itself, he was participating at the Delhi State Level, and in the same year, he got an international FIDE rating of 1130. He scored first rank in his age category in the DCA U1600 FIDE Rated Tournament, New Delhi. In the U13 national-level championship held at Ahmedabad, Gujarat (2018), Sahib ranked 17th while playing in an age category above his own.

He has been the state champion twice and runner up twice in his age category. He has received the bronze medal at the U12 National Schools Chess Championship held in Aurangabad, Maharashtra.

He has represented the country on the international level many times. His first major international success was at the Asian Youth Chess Championship, Waskaduwa, Sri Lanka, where he ranked third in the U12 Blitz format and fifth in the U12 Rapid format. He also bagged team gold at the same platform in both the events. In 2019, he was awarded the title of ‘Arena Grandmaster’ by FIDE. Also in 2019, he went on to get two silver medals (Classical and Rapid) at the Western Asia Youth and Cadets Championship. Then in the same year, he got the eighth position at the World Cadets Rapid Chess Championship held in Minsk, Belarus.

During the pandemic times, he continued playing online and won podium finishes in many state, national and international level events.

His latest achievement is getting a golden hat-trick at the Western Asia Youth Chess Championship held in Ukulhas, Maldives, in June 2022, where he bagged three gold medals for India in all the three formats of the game – Classical, Rapid and Blitz.

While the list of achievements goes on and on, Sahib also understands the importance of his curricular activities and fulfills his responsibilities to the best of his abilities. He pays equal attention to his academics and his tournaments, and manages his time accordingly. Furthermore, his parents are proud of the fact that Sahib is a religious child and devotes an hour or so to his prayers daily.

His roadmap includes becoming an International Master in the next 3-4 years. From thereon, his heart is set upon becoming a Grandmaster within two years. His ability to make such detailed roadmaps and plans for his future is really commendable. It shows his dedication to his passion. It also shows his ability visualize a goal ahead of him and accordingly come up with a way to achieve the goal. This is the sign of an analytical mind and to have such dedication at such a tender age is commendable.

With his commitment towards his passion, and his unusual ability to execute the plans, Sahib is bound to achieve his goals and hold the title of the Grandmaster of Chess in the near future.