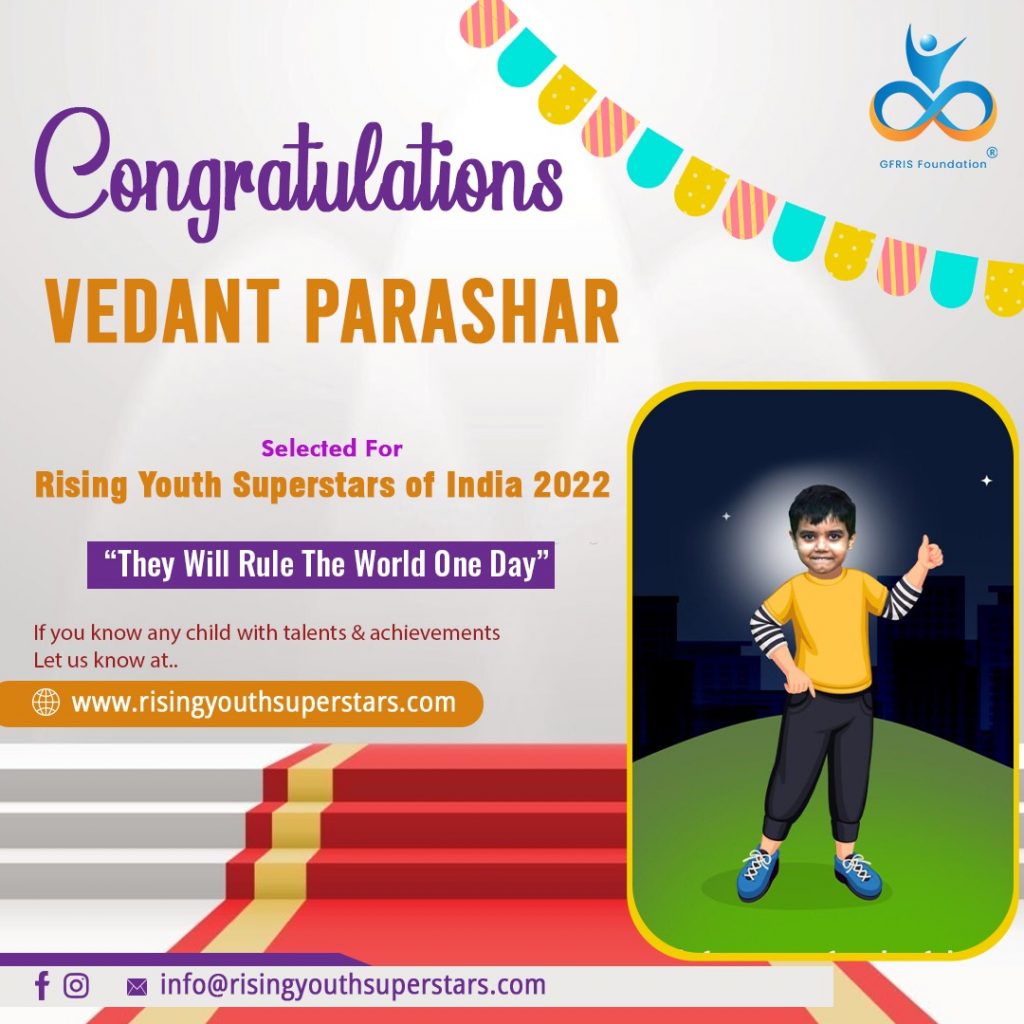 At an age where children are mostly trying to learn to read and write, Buxar-based Vedant Parashar was already narrating stories and poems, and working on getting his books published. His list of talents and interests is quite extensive. Primarily, Vedant is an author. In fact, he is one of the youngest authors we have today. Apart from that, he is a science and robotics aficionado, a chess genius, a musical marvel, a football and boxing enthusiast, and much more.

On the face of it, Vedant may seem like an ordinary 7-year-old. However, his skill set is so extensive that he can give professionals a run for their money. His publications as an author include ‘The Bedtime Stories’ and the ‘Children’s Story and Poetry’. He published the latter at a tender age of five.

‘Bedtime stories’ is a cute collection of 22 short stories and three poems. Several attributes make this compilation truly unique and a must-read for all children. These delightful little stories are penned narratives written by Vedant when he was just six-year-old. Each beautifully captures the innocence and purity of a child’s imagination and creativity. His ability to put it into words, and embellish each story with a flowing storyline, is a heart-winning feature of ‘Bedtime stories’. This amazing collection with colourful, vibrant illustrations not only transports the reader to the world of a child’s fantasy but also enriches him/her with moral values. It is the perfect gift for any child, as a bedtime read, to inculcate the reading habit found missing among most children in today’s world.

What is more breathtaking is the fact that Vedant has a collection of over five hundred books, which include nearly sixty chess-related books. He is an avid reader and a bibliophile and spends nearly three to four hours playing chess and solving puzzles on a daily basis.

He is a genius in many regards. While he himself is a student of Class 1, he can easily solve mathematical problems of the Class 6 level. He has worked with snap circuits such as the Elenco SC-100 and the Elenco SC-750. His interest in science and robotics developed at an early age and he subscribed to services such as Flintbox and Magic Crate when he was barely one and a half years old. These services are meant for children between ten to twelve years of age.

Vedant also shows a deep-rooted interest in robotics. He has a LEGO EV3 and Arduino, which he spends hours debugging. He is also a scientific genius. Vedant has several symbols of various elements of the periodic table committed to memory.

In terms of family support, Vedant has the support of all family members. Everyone was incredibly supportive and encouraging and always ensured to give him the space required to explore his different interests and talents.

His list of accolades and achievements include an entry in the India Book of Records and the Harvard Book of Records. He was also the best performer in the India Talent Olympiad. He is a certified music performer in Hindustani, Western Classic, and Carnatic forms. His inspiration to undertake so many things comes from his innate desire to explore complex problems and solving them. He has a level 100 for Grade 6 on Prodigy.com and has two publications to his name as well.

In terms of future plans, Vedant is guided by his heart. He lets his passion flow naturally and has not restricted himself to a particular ambition. This is not surprising, considering that he excels in several fields. He loves to explore anything and everything and his parents, Vinita Pandey and Raj Kumar Pandey, are proud of their little boy wonder.
His coaches and trainers include RB Ramesh and Gregory. All of these people have been instrumental in providing guidance to Vedant in order to ensure that he utilises his skills with utmost efficiency.

With a little more guidance and care, Vedant could not only grow to become a gifted and successful individual, but could also become an indispensable asset to the society and the nation. The scope of his potential covers more than just a bright future ahead. He is bound to have a positive impact on a global scale.